Many people already know that I enjoy creating narrative-driven games and interactive experiences. So when I got the opportunity to make my first VR game, of course it had to be just that. I’ve played VR games at showcases and exhibitions in the past, so I started to develop an understanding of the challenges of designing narrative in VR. The biggest problem is this:

Being place in a VR world causes the players to be driven by their own curiosity. So if there’s a narrative, players are more likely to not pay attention to the story, due to being distracted very easily.

Players can choose whether or not to pay attention to a narrative, especially in VR. However for my game, I want players to pay attention, listen and take part in the narrative.  So I designed my game so that the players need to listen to the ghost talking, in order to figure out where he is located to stab him.

Todd the Ghost needs to be constantly talking in order for the player to determine where he is located, but Todd blabbers on for only a certain amount of time. So when he stops talking, the player could potentially lose where Todd’s position is. So now what?

I want the players to interrupt Todd’s raging by stabbing him while he is talking. However, one problem I noticed early on is that players may want to keep listening to him rambling on. I obviously can’t record a massive endless run of dialogue for this small project, so I had to figure out a way to finish off Todd’s dialogue without the player forgetting where he is located when he’s done. I designed a fluid dialogue tree so that Todd will spit out roughly 3 insults to the player when he is in a vulnerable state (meaning the player can attack him). After those insults, he will do around 10 seconds or so of exertions — like laughing, aggressive breathing or screaming. This audio line is meant to hint at players that he has stopped talking and that the option to attack him is still available. After that, there will be about 3-5 seconds of silence and then Todd will scream out a bark, intending to attack the player. Due to scope and time, this mechanic of Todd attacking the player if they do not attack him first has not yet been implemented. So there currently is no lose state. I’m hoping to design it so that if the player gets attacked a certain amount of times by the end of the game, they will get a certain type of ending. For example, if the player was attacked 3+ more times out of the 6 rounds, they will be killed by Todd. This first-draft diagram shows how I originally wanted the player to die right after failing to attack 3 times, however that’ll shorten the VR experience and prompt the player to restart, which they may not want to try again. Potentially having various endings based off how well the player plays the game will at least give the player a full satisfying experience. 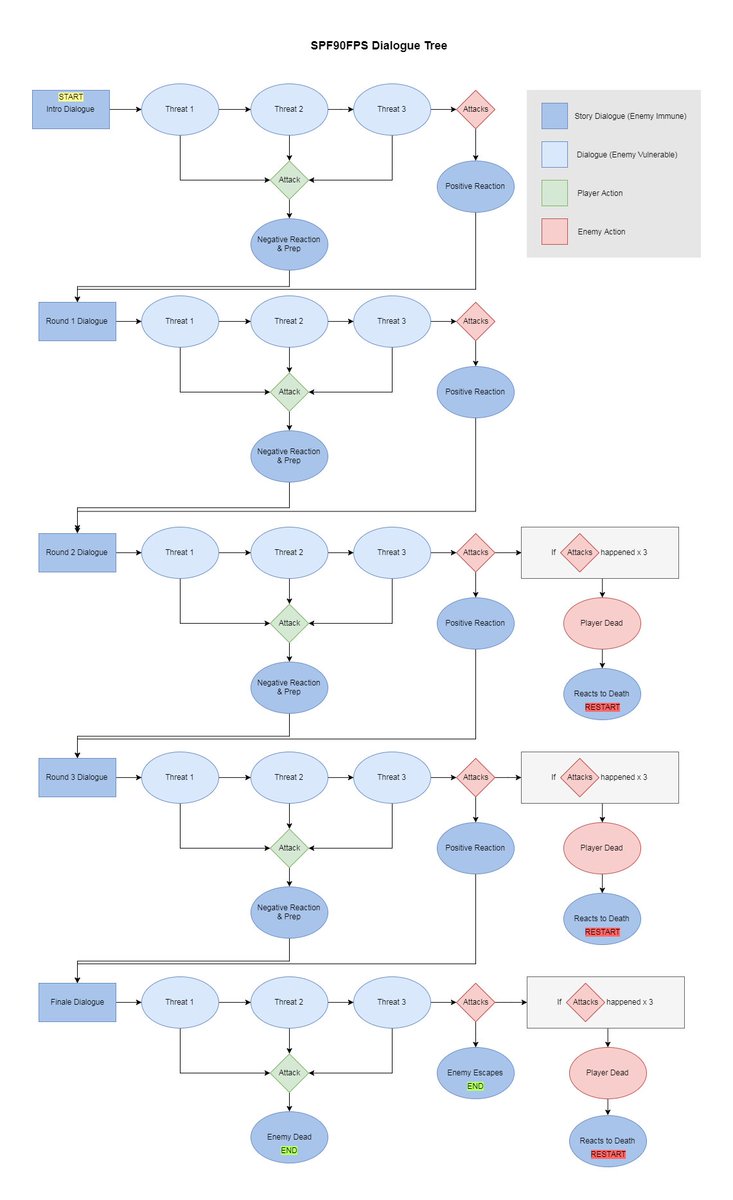 The first-draft of Todd’s dialogue tree based off player actions.

The Character of Todd the Ghost

Todd’s character is highly amusing to me and I really enjoyed writing him. He’s a college frat who died in the basement of his fraternity. He’s a complete douche and died being a douche. A minor character I have in the game for a small section is Brad, who a typical normal guy who is used as a foil to contrast how self-centered Todd is. One challenge I wanted to take on was designing Todd as a villain you’d love to hate. Originally I wanted his character to be drunk like at a party, but I found early on that players may not want to attack someone who is this vulnerable. So Todd had to be a terrible — yet entertaining — character on purpose. He is responsible for and in control of his actions. So if he decides to act like a dick, you do not feel as bad hurting him. In order to making him enjoyable to hurt, his reactions to the player’s actions are vital. His reactions had to be extremely expressive, which is why I decided to throw in a lot of profanity and curse words.

Todd the ghost is a character you’d love to hate. Due to his expressive reactions, you find enjoyment and satisfaction when attacking him.

For this character I heavily found inspiration from Borderlands 2‘s Handsome Jack. He is exactly the type of character I wanted Todd to be, so I wrote most of Todd’s lines in Jack’s voice to help me quickly visualize and understand his character. Luckily my voice-over actor was comfortable and excited to do some very loud dialogue recording like yelling offensive content and screaming.

I sent my VO actor a YouTube playlist of Handsome Jack portraying his personality at his best in a variety of small slips (the longest being 6 minutes of barks). I avoided putting in very long videos not to overwhelm my actor, however he ended up finding and listening to an hour long video containing ALL of Jack’s dialogue lines! 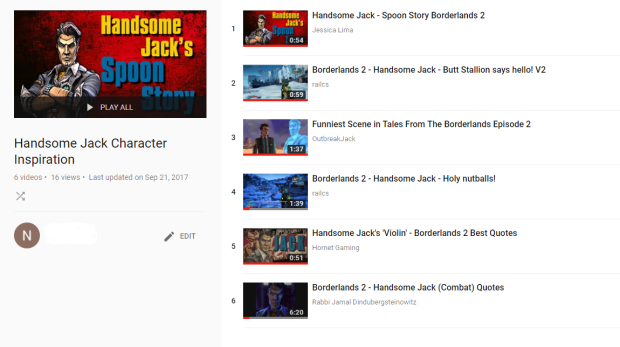 Video playlist sent to my VO actor for reference.

Instead of writing the game’s dialogue in a film-styled script, I wrote and organized it into a spreadsheet instead. That way, I can visualize more clearly where and when the dialogue would play, and spend less time reading through the script. Each round is colour-coded and each dialogue line is assigned a type and a code name that is referenced in Unity. 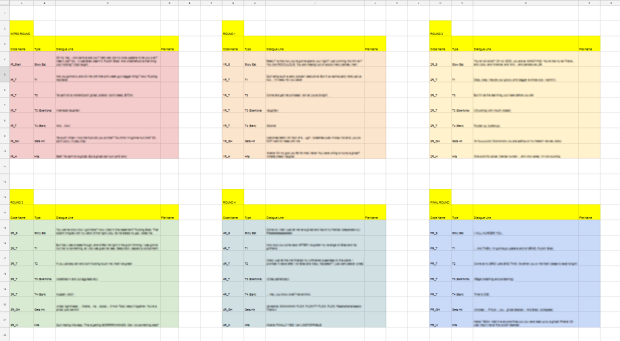 First-draft spreadsheet of all of Todd’s lines.

To learn more about recording the dialogue and see behind-the-scenes, check out Part 3: Prototype Development & Recording.

For this game (and practically all my games), I wanted it to be comedic. I’ve written a few research reports of this topic in the past, so taking what I’ve learned so far and implementing these concepts into my games helps me get a better sense of how we can create comedy games. And also… it’s a ton of fun.

Before I go into how I designed the player-centered comedy, let me tell you about how the name of my game came first. It’ll come full circle later!

When it came down to naming the game, I was stumped. I had a previous game idea years back that was called “Todd Damnit,” and that was somewhat similar to this game. So I decided to just name the ghost Todd for now, so if I couldn’t think of a better name, the title made sense. I kept saying my game was a ghost-stabbing game on social media and around Gamma Space, so I really wanted to call it “Ghost Stabber VR.” That way, players know what they are in for. Back on Disco is Dead!, the game’s name doesn’t highlight the fact that the game is about slapping zombies (literally). It eventually got known as the zombie-slapping game, but if the title actually contained the words “zombie” or “slapping,” would it have helped players quickly grasp the context of the game? So should the game’s name highlight the mechanic or not? I decided to ask Twitter for help. With that, I got an answer… and lots of really fun puntastic suggestions!

So Todd Damnit ended up being the winner, which was slightly pleasing. Later on after some quick playtesting, I realized that Ghost Stabber VR would have not been the best choice. Why? Because it would have put into the player’s head that they are only obligated to stab ghosts. Limiting a player’s fantasy — specifically a player’s comedic fantasy — will cause all players to have relatively the same experience. One tester wanted to adorably poke the ghost with no force and found enjoyment through that by being the Ghost Poker. I found that players did not just want to stab: they want to poke or lunge or jump attack. I was really happy to see this because it means that the game is open to comedic expression, meaning players can be a comedian and have their own personal experience.

Hell, players in my game can hump the ghost if they’d like to.

Having a simple open-ended mechanic allows players to create their own comedy.

I actually originally wanted to design the attack/stab mechanic so that players need to put in a certain amount of force in order for it to count. That way, it can stop players from accidentally touching the correct trigger box unintentionally. But because this would restrict player creativity in how they’d like to attack — and also because I’m not the best at coding — I kept the mechanic simple. In order for the player to attack Todd successfully, these conditions need to be met:

Even though players can still accidentally hit Todd due to their positioning, there can be other solutions to prevent this from happening, such as re-positioning trigger boxes.