In the last two months I was fortunate enough to be selected to take part in Dames Making Games‘ first VR intensive program called SPF90FPS. Spending one month conceptualizing and the other in full development, I was able to have a fully playable prototype of my 5-minute game — titled “Todd Damnit” — at the opening party of DMG’s first conference, Damage Camp.

The premise of the comedy horror game is simple:

Time to stab ghosts in VR! As a paranormal exterminator, you are sent down to a fraternity basement to exterminate an annoying ghost named Todd.

Because the enemy is a ghost, the player cannot see him. The game is designed specifically with spatialized audio. So in order for the player to attack Todd the Ghost, the player must listen to the him rambling in order to pinpoint his location.  The game plays with the HTC Vive on Steam VR.

When I first pitched my game idea in SPF90FPS program application, I stated I wanted to create a small VR game that had a disembodied voice yelling at the player’s actions constantly. Basically, I wanted to do The Stanley Parable in VR.

With this in mind, I had created these goals:

Starting off fresh with a new notebook, I drew visual maps of how I wanted to design this game that doesn’t rely much on visual cues. It’s hard to visual a game that’s mainly driven by audio, so I had to constantly keep drawing up maps and diagrams to get a better understanding of how it should potentially work. I drew this everywhere. On the bus, train, at work, at Gamma Space, and not just in my journal either. I drew it on receipts and any sort of paper I could find. The diagram was permanently stamped and infused into my brain.

I drew this diagram everywhere like alien-like crop circles.

Choosing Which VR To Work With

During very early prototyping stages, I was using the Oculus. Eventually I learned that my game does not play that well with this VR set, particularity the controllers. In my game, the player will have a dagger-like weapon to attack the ghost. The Oculus controllers are slightly rounded and short, and the grip does not re-enact gripping a dagger. It was uncomfortable and I felt disconnected with the weapon I was holding, because my brain could not register that I was really holding a dagger. 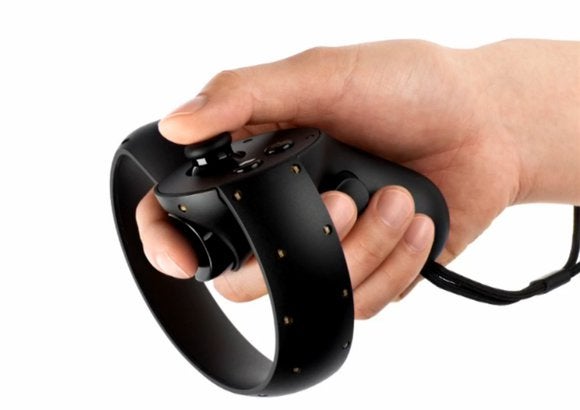 So I quickly made the switch to the HTC Vive. Its controllers felt more natural, and seems to support better and more fluid body movements for the player to attack Todd the Ghost. I’ve also personally had a better experience playing VR with the Vive in the past, and found that I hardly got motion sickness using it.